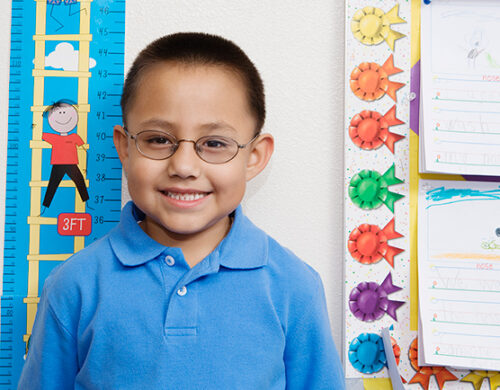 The first case of 49,XXXXY syndrome was reported in the 1970s, and it remains one of the rarest sex chromosome disorders, with an estimated prevalence of 1 in 85,000 to 1 in 100,000 live male births. 49,XXXXY results from nondisjunction (an error in chromosomal separation) of the X chromosome during both Meiosis I and Meiosis II.

Boys with 49,XXXXY are typically more affected than boys with other sex chromosome variations, such as 48,XXYY and 48,XXXY. This syndrome is associated with severe speech and motor delays, hypotonia (low muscle tone), as well as learning disabilities and physical manifestations affecting the skeletal, cardiac, and genital systems. Mean height is typically below average, and growth deficiency is associated both prenatally and postnatally, which could be due to the extreme over-
dosage of sex chromosome genes in multiple organ sites and growth pathways. Common features presenting in 49,XXXXY boys include arched eyebrows, ocular hypertelorism, flat nasal bridge with upslanting palpebral fissures, and radioulnar synostosis.

Verbal and oral motor dyspraxia is evident, and it has been reported that more nonverbal skills are more intact than verbal skills. Moderate-to-severe language-based learning disorders can affect these boys’ social interactions and result in behavioral manifestations of difficulties in tolerating even low frustration, and oppositional behavior.

Boys with 49,XXXXY may have an increased incidence of atopy (a heightened immune response to common allergens) and antibody deficiency, recurrent otitis media, and asthma than the general population. Brain imaging studies have shown reduced total brain volumes, as well as white matter lesions, minor skull deformities, and thinning of the corpus callosum.

Boys with 49,XXXXY typically have phallus length below the 10th centile, suggestive of lifelong androgen deficiency. Microorchidism occurs in almost all cases in adolescence and adulthood. Early androgen therapy has been suggested to have a positive effect in speech and language, gestural communication, and vocabulary development.